Link to this page

Allegory of Science
Order a Hand-Painted Reproduction of this Painting

Jean-Baptiste-Simeon Chardin was born in Paris, the son of a cabinetmaker, and rarely left the city. He lived on the Left Bank near Saint-Sulpice until 1757, when Louis XV granted him a studio and living quarters in the Louvre.

Chardin entered into a marriage contract with Marguerite Saintard in 1723, whom he did not marry until 1731. He served apprenticeships with the history painters Pierre-Jacques Cazes and Noël-Nicholas Coypel, and in 1724 became a master in the Acadèmie de Saint-Luc.

Upon presentation of The Ray in 1728, he was admitted to the Acadèmie Royale de Peinture et de Sculpture. The following year he ceded his position in the Acadèmie de Saint-Luc. In November of 1731 his son Jean-Pierre was baptized, and a daughter, Marguerite-Agnes, was baptized in 1733. In 1735 his wife Marguerite died, and within two years Marguerite-Agnes had died as well.

Beginning in 1737 Chardin exhibited regularly at the Salon. He would prove to be a 'dedicated academician', regularly attending meetings for fifty years, and functioning successively as counsellor, treasurer, and secretary, overseeing in 1761 the installation of Salon exhibitions.

In 1744 he entered his second marriage, this time to Françoise-Marguerite Pouget. The following year a daughter, Angèlique-Françoise, was born, but she died in 1746.

In 1752 Chardin was granted a pension of 500 livres by Louis XV. At the Salon of 1759 he exhibited nine paintings; it was the first Salon to be commented upon by Denis Diderot, who would prove to be a great admirer and public champion of Chardin's work. Beginning in 1761, his responsibilities on behalf of the Salon, simultaneously arranging the exhibitions and acting as treasurer, resulted in a diminution of productivity in painting, and the showing of 'replicas' of previous works. In 1763 his services to the Acadèmie were acknowledged with an extra 200 livres in pension. In 1765 he was unanimously elected associate member of the Acadèmie des Sciences, Belles-Lettres et Arts of Rouen, but there is no evidence that he left Paris to accept the honor. By 1770 Chardin was the 'Premiere peintre du roi', and his pension of 1,400 livres was the highest in the Academy.

In 1772 Chardin's son, also a painter, drowned in Venice, a probable suicide. The artist's last known oil painting was dated 1776; his final Salon participation was in 1779, and featured several pastel studies. Gravely ill by November of that year, he died in Paris on December 6, at the age of 80.

Chardin's work had little in common with the Rococo painting that dominated French art in the 18th century. At a time when history painting was considered the supreme classification for public art, Chardin's subjects of choice were viewed as minor categories. He favored simple yet beautifully textured still lifes, and sensitively handled domestic interiors and genre paintings. Simple, even stark, paintings of common household items (Still Life with a Smoker's Box) and an uncanny ability to portray children's innocence in an unsentimental manner (Boy with a Top [below]) nevertheless found an appreciative audience in his time, and account for his timeless appeal.

Largely self-taught, he was greatly influenced by the realism and subject matter of the 17th-century Low Country masters. Despite his unconventional portrayal of the ascendant bourgeoisie, early support came from patrons in the French aristocracy, including Louis XV. Though his popularity rested initially on paintings of animals and fruit, by the 1730s he introduced kitchen utensils into his repertoire (The Copper Cistern, ca.1735, Louvre). Soon figures populated his scenes as well, supposedly in response to a portrait painter who challenged him to take up the genre. At any event, he was presently painting half-length compositions of children saying grace, as in Le Bènèdicitè, and kitchen maids in moments of reflection. These humble scenes deal with simple, everyday activities, yet they also have functioned as a source of documentary information about a level of French society not hitherto considered a worthy subject for painting. The pictures are noteworthy for their formal structure and pictorial harmony.

In 1756 he returned to the subject of the still life. In the 1770s his eyesight weakened and he took to painting in pastels, a medium in which he executed portraits of his wife and himself.

Today his paintings hang in the Louvre and other major museums. His work became popular with the general public after low-cost engravings of his paintings became available.

He is much admired for his still life work and portraiture in pastels, which are now highly valued. His self-portrait (top right) was produced in the latter medium. Chardin painted humble scenes that deal with simple, everyday activities. He used blocky simple forms perfectly organized in space, and few colors, mostly earth tones. He was a master of textures, shapes, and the soft diffusion of light. 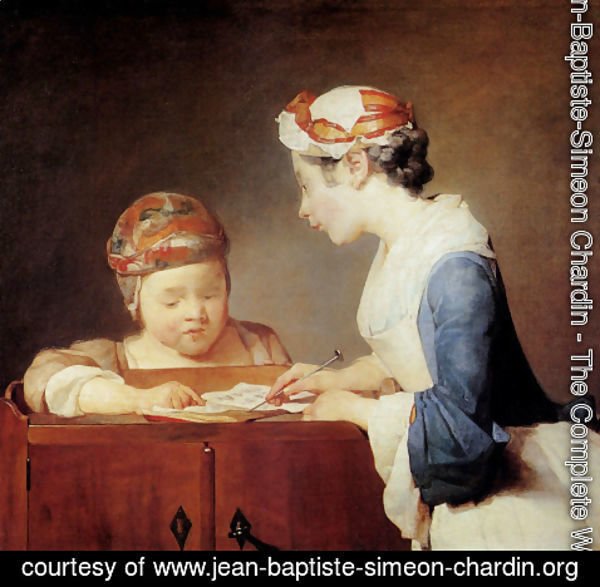 Chardin's influence on the art of the modern era was wide-ranging, and has been well-documented. Edouard Manet's half-length Boy Blowing Bubbles and the still lifes of Paul Cèzanne are equally indebted to their predecessor. He was one of Henri Matisse's most admired painters; as an art student Matisse made copies of four Chardin paintings in the Louvre. Chaim Soutine's still lifes looked to Chardin for inspiration, as did the paintings of Georges Braque, and later, Giorgio Morandi. In 1999 Lucian Freud painted and etched several copies after The Young Schoolmistress (National Gallery, London). (From Wikipedia)

Report an error on this page